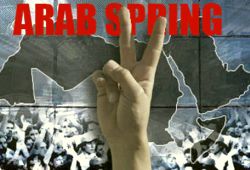 [/frame_right]Arab Spring brought the Muslim Brotherhood, and Sharia Law. Monotheisim of Sharia “Revealed Law” and Noahide Law promoted by Chabad Lubavitch (Chabad is the first 3 levels of Kaballah; Lubavitch Rebbes are blood line descendants of Kaballaists; no Kabbalah is not Jewish) denies Jesus Christ is God in Flesh and hence the Holy Ghost, the only “Unforgiveable Sin”; Alawites such as Syria’s Bashar Al Assad are in this Monotheist Arab group as well.

Al-Qaeda means “Solid Foundation”, a made up entity of the US dating from a 1966 (Church of Satan “Year One”) speech by Stanford University professor Ibn Sayyid Qutb. Sayyid means descendant of Muhammad through his daughter Fatimah and Ali, and Qutb a title of Dervish Nobility meaning “World Pillar”. The Temple of Set was founded by Church of Satan co-founder Gen Michael Aquino; it is no coincidence this NSA General is completing the world’s largest Spy facility in “Zion” (Salt Lake City, Utah) or that Engine #119 joined the Trans-continentall Railroad in Zion or that 119 is the Area Code for Iran (Persia) and Iraq (Babylon).

Qadaffi, of Berber descent developed the GMMR (Great Man Made River) turning the desert into agricultural land. He offered fuel at a nominal cost. He refused the $US in favor of the African Dinar which would have freed Africa from Int’l Bank Usury. He provided interest free loans to newlywed couples and study abroad scholarships to college age kids. He was hunted down by a US Drone.

The U.S. illegally fired 160 Uranium tipped Tomahawk Cruise Missiles and destroyed the GMMR, the world’s oldest pristine water supply. They set up the Central Bank of Benghazi, installed a Consulate there and now have troops on the ground and Drones in the air over Libya; now the US Government looks to spin this illegal foray into another al-Qaeda 9/11 event on 9/11. Congress never declared or ratified the Libyan War under the War Powers Act; the US has no legal basis for this aggression.

Illegal Drone wars in Yemen, Ethiopia, Pakistan and Afghanistan can now be combined with Egypt and Libya. Why? WWIII must appear to be the final, end of the Millennium (1000 years) battle “Gog and Magog” described in Eze 38; read Eze 38:5 and 38:13 (Sheba and Dedan=Arabia). Now read Eze 37:16 taking note Mitt Romney claims (A lie) lineage from Joseph and Ephraim; compare this with Rev 11:1.

Barack “Blessed Lightning” Obama “He is with us” stood next to Hosni Mubarak “Blessing or Benediction” in Cairo, the home of the Arab League proclaiming “A new beginning for Islam”. Cairo is derived from the Arab “Al Kahira” meaning “The Strong”; in Egyptian “Khere-ohe” means “Place of Combat”. Folks, “al-Qaeda” or “Foreign Toilet” as Arabs call it was “Made in America”; Mitt Romney has sworn an “Oath of Vengeance” against America and is a Council on Foreign Relations initiate, sworn to end US Sovereignty; a Welsh Gypsy who claims descent from the wife of Joseph “Asenath”, the daughter of the High Priest of On (Heliopolis) near Cairo. Libya is a Phoenician outpost whose Phoenician son, Hannibal Barca “Blessed Lightning” made war with Rome, enticing them to Salt, Scorch and Piss in the ashes of Carthage. Joseph Smith, martyred in the Carthage Jail on whose blood the Mormon “Oath of Vengeance” is based is no accident.

The players for WWIII are all in place and listed in Eze 37-38. Mahmoud Ahmadinejad has been told the same thing Mitt Romney has; al-Mahdi is the Alternative Messiah aka Pale Horse who rides according to www.One-heaven.org/ on 12/21/2012, as the Sun rises to form the Chi-Rho in the sky. Sounds a lot like Cairo doesn’t it? Just remember it is the Divinity of Jesus Christ and the Holy Ghost these “confederates” all deny. Stay out of this “Place of Combat”; Greeks called Egypt “Land of Gypsies” for a reason and America has one running for President now. The Arab Phoenix self immolates itself every 500 years; the Age of Discovery was 500 years ago; it connects Egypt to Arabia across the Red Sea and out of its ashes “New Atlantis” rises.

I’m not trying to cause panic here, just pointing out that our generation may indeed be living in the days leading up to the Great Tribulation; as Peter said “…be not ignorant of this one thing, that one day is with the Lord as a thousand years, and a thousand years as one day. The Lord is not slack concerning his promise…not willing that any should perish, but that all should come to repentance” 2 Pet 3:8-9 Folks, I have listed dozens of ways to calculate the age of the Earth is fast approacing 6000 years, and Gnostics know this quite well. Chaldeann Magick has 3 parts: Pledge, Turn andn Prestige; we just happen to be living at the time of the Prestige.

No Priest, Imam or Rabbi!

Just You and Jesus Christ!