[/frame_right]The most common scientific means to calculate the age of once living things is “Radiocarbon dating”. This relies on knowing the ratio of stable carbon-12 to radioactive carbon 14 in the cells of once living things, and measuring the amount of carbon-14 that remains when the specimen is found. Nearly 80% of the atmosphere is nitrogen. The carbon cycle begins in the atmosphere where nitrogen is hit by solar radiation and converted into radioactive carbon dioxide in the form of Carbon-14. God created the Sun, Moon and Stars on Day 4, to tell time, seasons and for signs. Radio carbon dating of the frozen and preserved record is one of those signs. Solar radiation converts about 21 pounds of atmospheric Nitrogen-14 to radioactive Carbon-14 per year. Carbon-14 is not stable; it has a ½ life of about 5700 years, meaning ½ will be converted to stable Carbon-12 in 5700 years. Uneven heating of the Earth’s surface causes “Weather”; this system distributes it equally over the earth.

Plants interact with the atmosphere through photosynthesis. 6CO2 + 6H2O + Light= C6H12O6 + 6O2 . The equation simply says Carbon di-oxide, whether radioactive or not, in the presence of Water and Sunlight causes “Plant Growth” which gives off Oxygen, the required element for Man (Woman as well) and Animal respiration and growth. Important point: Animals and Man cannot exist independent of each other they must have been created at the same time!

Most scientists regard the flood as myth; they are hampered by assuming the atmosphere has not undergone any significant changes in the last 6000 years; wrong! The conditions existing in the pre-flood world were much different than now; no mountains, much more vegetation, more moisture in the air and more oxygen. Genesis 2:6 “But there went up a mist from the earth, and watered the whole face of the ground.” In this misty environment, vastly higher human life spans were possible, much more vegetation was supported which would produce much more oxygen than today, warmer uniform temperatures existed all over the globe and people were not over crowded in cities or separated by vast amounts of salt water. Another reason for longer life spans was Man had not yet detonated a thousand radioactive Uranium, Plutonium or Hydrogen bombs in the atmosphere; Man had no began to release heavy metal toxins via Chemtrails; Man had not yet began salting or scorching the earth; Man had not yet began systematically destroying water supplies and forests. There were no ice sheets or deserts, but rather just a vast “Biosphere” or “Greenhouse”.

The Flood uprooted and buried all this vegetation producing an earth void of carbon scrubbing vegetation for awhile after the event. In Old French, “Yes” is “Oil” which is what was produced, along with Coal and Natural Gas. Ever heard the phrase “Yes We Can”? It refers to controlling Man by controlling Energy and remaking the Earth to pre-flood conditions. The Flood lowered the levels of Carbon-14 in the atmosphere and oceans very suddenly by this global scrubbing event. A paleontologist or botanist, pre-disposed to look for ages in the 10’s or 100’s of thousands of years finds exactly what they expect as does the bible believer who sees abnormal spikes in ages around 4500 years old. Analyzing a specimen by a person who discards the bible story as hogwash would not take into account the much lower initial amount of carbon-14 in the sample caused by the Flood. Therefore, they would conclude that the specimen was much older than it actually was in comparing it to post-flood samples. The bottom line with using radio-carbon dating techniques is that you must have complete confidence in consistent solar radiation and a constant atmosphere to use the ratio of Carbon-12 to Carbon-14 as an accurate predictor of age of organic material. Now, what about the Dinosaurs? 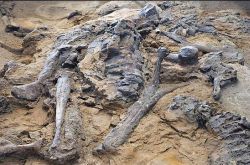 [/frame_right]Dinosaur is a recently coined term meaning Deinos + Sauros “Terrible Lizard”; models are created from plaster and placed in Museums created after people had become accustomed to Darwin’s “Theory of Evolution” and Charles Lyell’s theory on Tectonic Plate movements. They are guesses made from finding fossilized rocks which look like bones. Bones subjected to high heat, water and pressure exchange carbon for silica becoming rocks; this is the same for Petrified Trees; Petra means Rock. An artist, making a guess about the look and personality of an animal buried in sandstone and converted to rock is hardly “Rock Solid” evidence; good pun eh? Behemoth and Leviathan? Sure, God used the Flood to preserve and date them. Earth’s Crust cracked; evidenced by the Mid-Atlantic Ridge. High pressure water inside the earth, not subjected to sunlight shot up, picking up and dissolving silica while getting hot; this salty mixture fell back as super cooled salt water and froze Mastodons, Wooly Mammoths, even Man etc where they stood. Animals like these cannot survive at the current latitude of Siberia; their trunks would freeze, so how did the weather change?

Continents slid apart much like a tire “Hydroplanes”; evidenced by the matching shapes of the east coast of the Americas and west coast of Africa. Mountains formed; evidenced by the Chugash Mountains in Alaska, folded like an accordion or Sea Shells on Mt Everest. This Shifted and created a Wobble about the Earth’s Axis. The “Terrible Lizard”? Look above the North Polar Axis at the constellation “Draco”. Temperate climates now became frozen and rain forest “Garden of Eden” turned to desert across the Middle East. Flash Frozen specimens gave us a permanent and datable record of their existence in the frozen high latitudes of the now 230 tilted Earth.

The bible says there were behemoths and leviathans, but it does not mention hundreds of varieties; Man was given “Dominion” over all animals; living with a bunch of T-Rex’s around would have made life very much a “Survival of the Fittest”.

We have more oil in the ground than we will ever use. Did it all come from rotten dinosaurs? If it did, they must have been like a New York traffic jam all over the globe to create that much oil. When a deer dies, it doesn’t become oil, so why would a dinosaur? Someone needs to explain how all those dinosaurs ended up with flesh intact, miles deep in the earth, wet enough and hot enough to form long chain carbon-hydrogen molecules we call oil for this theory to work, so I have to call BS.

A common technique for measuring the age of inorganic matter (non living) is radiometric dating using the decay rates of known radioisotopes. This technique measures of the amount of time a radioactive material takes to decay into its “daughter” elements. Radioactive uranium atoms emit an alpha particle (helium nuclei). Jesus is “Alpha and Omega”, so now it may make sense why father of the Hydrogen Bomb Edward Teller said “It’s a Boy!” after the 1st detonation over the Pacific Ocean, and J Robert Oppenheimer, said “I have become Death, the destroyer of worlds” after witnessing the 1st Atomic detonation at the aptly named “Trinity” Site. Man had become as God! Radiometric dating measures the chemical make up of Uranium daughter elements like thorium, cesium, strontium, polonium, and eventually lead. These particles radiate out in a circular fashion leaving different colored rings called halos in the surrounding material. Some isotopes are very fast radiators, changing in less than a second, and others are very slow radiators, changing on the order of billions of years. When the element stops being radioactive it becomes stable (lead). Granite and mica specimens contain Halo evidence of very short lived isotopes that should not be there if millions of years were involved in their production.

Utah has many examples of radio-halos in wood that has turned into coal in the Escalante river drainage due to its high content of uranium. These halos often have short lived isotopes present indicating the change into coal was very rapid. Many petrified trees have oval shaped radio-halos indicating a very rapid compression during burial in sediment which later came to be called “Sandstone”.

Petrified logs show evidence of very rapid saturation by uranium and silica rich water. The burial is on the order of days or weeks, not millions of years. How else would a circular halo turn into an oval? All of this is inconsistent with old earth theories but, fully supportive of a 6000 year old earth ravaged by a global flood.

Evidence in Utah’s Cyprus Plateau Mine shows dinosaur footprints (not large T-Rex ones) next to coalified logs in the mines coal seams. The pattern of the tracks suggests the animal was fleeing, and the tracks obviously had to have been rapidly buried to remain part of the fossil record. Nearby, on the southern slope of the Uintah Mountains, the Dinosaur National Monument, and the upper San Rafael Swell is a veritable graveyard of dinosaur bones. Were the animals fleeing to high ground? What could have overcome them so quickly as to fossilize their bones, and produce coal at the same geologic level? The Flood perhaps?

Other observations which tend to support a very young earth:

Modern Science has made people “Dumb” to truth; the word means Confusion, Stupefaction, or Speechless. God Created the Earth just under 6000 years ago, gave us the Sun, Moon and Stars to tell time; warned us of approaching promise to return in 6000 years (2 Pet 3:8) and warned us of a great falling away from truth 3 ½ years before that time came. He gave us a perfectly preserved record of His Judgment of Sin with Frozen Mammoths as well as the melted cities of Sodom and Gomorrah. Jesus came as God in Flesh to make the Word known; He was Crucified. The Sun will rise through a symbolic “X” (X means Chi or Christ) in the sky formed by the Zodiac and Milky Way on 12/21/2012. Forget about all the nonsense of Black Holes, Rapture and Aliens and look at the Gigantic Sign God put in the Firmament to parallel or mirror image His Crucifixion; The Sun being Pierced by a Flaming Sword known in Kabbalah as “Shekina” or in terms the Middle East has come “To Know” “Shock and Awe”. Is it any wonder Paul told Timothy (1 Tim 6:12) to avoid vain and profane babblings of Science which is falsely so-called?