Red and blue are the colors of Quetzalcoatl the “Feathered Serpent”; Visible Light spans Blue to Red. Superman has 8 letters in his name; he’s the King of Kings of superheros. Kal-El/Clark Kent/Superman was sent to earth by his father Jor-El; El is Saturn. Like Jesus Christ, Superman’s earth-parent’s names begin with J and M. Johnathan Kent is Joseph and Martha Kent is Mary. El is Saturn, the Canaanite god.

It’s not the letter S. All you have to do is open your mind and use your imagination; then look again. It’s a snake and it’s been there this whole time. For centuries, maybe even millennia, the serpent has been adorned, respected and understood as a positive symbol. A symbol that represents ideas like healing, wisdom and power. Let’s not forget, the symbol that represents our number 8, starts out looking like a snake when you scribe it. This is the symbol that represents the Kundalini and the Caduceus, which are symbols for enlightenment and healing. Even Superman says it’s not an S.

It’s not the letter S; It’s a snake and it’s been there for 6000 years; the serpent is the occult symbol of healing, wisdom and power. Snakes shed skin annually, thus the Serpent symbolizes Time; Father Time is Saturn aka Kronos, the root of Chronometer and Calendar. Kronos is also called “Grim Reaper” because he eats his offspring as soon as they are born, to prevent them usurping the role of King. The Serpent is the symbol of Kundalini “Serpent Force” and the Caduceus , the Serpent entwined staff of Mercury “Messenger of the Sun” and Aescalapius the “Healer”. Rabbis use the phrase “Tikkun Olan” meaning “Repair the Earth” to the pre-flood conditions; a world ruled by Saturn where Sin was the norm. The Serpent symbolizes enlightenment and healing; functions only Jesus can fill.

I got both these photos from books that I have. The first picture is from the book, Superman The Ultimate Guide To The Man Of Steel, by Scott Beatty and the second is from, Superman Returns The Visual Guide, by Daniel Wallace. The insignia and the costume that Brandon Routh wore in Superman Returns, is texture and looks like snake skin.

Stalin “Man of Steel” killed more of his own countryman than anyone else on Earth. The Ultimate Guide To The Man Of Steel, by Scott Beatty and Superman Returns The Visual Guide, by Daniel Wallace tell the story. The insignia and the costume that Brandon Routh wore in Superman Returns, is texture and looks like snake skin.

What if, in order to become your super-self, all you had to do was raise, or awaken your serpent/ kundalini energy? Many people have reported being able to do this through the consumption of entheogens and through various forms of meditation. 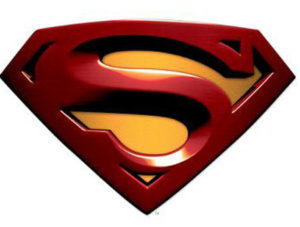 The letters in the name Naman, can be rearranged to spell manna . If manna is a mushroom and both Naman and manna come from the heavens; does that mean Superman is a mushroom? Not only have serpents and dragons been used as esoteric symbols for the Amanita Muscaria mushroom; they have been used to symbolize the experience of what happens when you take these and other entheogenic substances.
Serpents and dragons been used as esoteric symbols for Red/White Amanita Muscaria Mushrooms; entheogenic substances mean “God Within”. They grow under Evergreen Trees (Groves are where Evil is done in sight of the LORD), collected in winter (Saturnalia) by Red Robed Shaman (Santa=Satan); Reindeer shed antlers like snakes; Satan is called “Little Horn” or “Cernunnos” (Horned One) for this reason.

Clark Kent works for the Daily Planet newspaper, and their logo looks just like the planet Saturn. Saturn is also known as El and Clark Kent is also known as Kal-El . Saturn/Cronus/El/God is the God of time and agriculture . The metal affiliated to and representing Saturn is lead . Superman has X-Ray vision, which allows him to see through ANYTHING, except for one thing… lead . Saturn chariot is lead by serpents/dragons.

Superman’s alter ego hides in plain sight working for the Daily Planet whose logo is Saturn. Clark Kent is also known as Kal-El; Saturn/Cronus/El is the God of time and agriculture, hence “Reaper”; the Temple Mount is the Jebusite “Threshing Floor” where Tares are removed from Wheat using Saturn’s Grain Scythe (Scythians were called Black Sea Princes); Cain was the first “Farmer”. The metal affiliated to and representing Saturn is lead. Superman has X-Ray (X=Chi=Christ) vision, which allows him to see through everything except lead. Saturn’s chariot is lead by serpents/dragons; Saturn aligns with Earth and the visible Sun twice/yr on June 24 “Feast of St John” and “Saturnalia” Dec 24; John is the Rising Sun Saturn; from the latin Eannes or Oannes the Chaldean Fish God, the Sea Beast “Neptunis” and Sea-Goat “Capricornus”.

The astrological symbol for Saturn looks like a cross or Tt, with an Ss attached to it. On the TV show, Smallville, Clark Kent was tied to a cross and had an S, or snake painted on his chest. This is the symbol for Saturn and a symbol of a crucified savior.

Superman is the god of time. Not only can he travel forward and backward through time, he can control Earth’s time as well. The middle picture has the number 6 (the 6th planet from the sun is Saturn) and the planet Saturn. There’s also a film being made of Superman spinning the earth. Is he controlling Earth’s time?
Superman spinning the earth symbolizes Saturn/Chronos attempting to alter Time. He can’t, Earth is approaching 6000 years of age and Jesus will return when it is; Saturn arrives 1 1/2 years earlier at Rev 9:11.

Superman is Kronos. He is the God of agriculture, or farming and this is why Superman grew up on a farm, in Smallville, Kansas.