Noah, the psychopathic killer and Tubal-cain (they don’t overlap in scripture) the bible literate equal of God? Giants as the “Good Guys” helping Noah build the Ark? Giants were a primary reason God Flooded the Earth.

The message is another cleansing is in the works. Only this time it won’t be God, but Men who believe they are God.

When Noah receives his patriarchal blessing, note the snake skin on his father Methuselah; the bloodline is conveyed to Noah with this symbology of the Serpent? Not quite. Noah, the patriarch of humanity shows an absolute hatred for humanity in the movie; in the bible Noah is a preacher warning humanity. The movie has Adam and Eve falling into Sin by straying from the Light; BS! Giants helped Noah build the Ark and protected his family; BS. Tubal-cain is a stowaway on Noah’s Ark; BS. Earth is created before the Sun, Moon and Stars; BS. The Flood’s purpose is to destroy Earth and rid Earth of all mankind to save innocent animals; BS. Japheth as Noah’s youngest son is BS! Japheth is the oldest son and source of all the world’s White oriented (Russian, Iranian, Germanic, Mormon etc) Elitist mentality. Tubal-cain is the patron of Masons worldwide and is represented by the Tau “Way of Path” and Tammuz “Purify by Fire”; the ashen “T” over the 3rd Eye (Iris) used to start Lent following Carnivale. Tubal-cain aka “Thor of the Celts” is highlighted in Noah; because Tubal-cain is the Masonic god Vulcan. 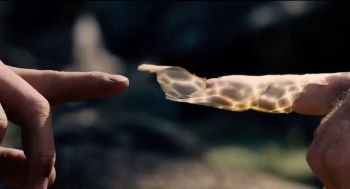 Noah is a Gnostic Hollywood movie based on the Apocrypha books “1 & 2 Enoch” and “Jubilees”. Jubilees 7 is the source for the 7 Noahide Laws proscribing decapitation for the worship of Jesus Christ. Pharisees and their Hasidic “Synagogue of Satan” counterparts in the Sanhedrin crucified God in Flesh and intend to do the same to all of His followers.

The book of Jubilees has 50 chapters dividing history into Jubilee Cycles. The last Jubilee? At the risk of over simplification, 1966 was called “Year One” by the Church of Satan; the Jubilee year 2016 follows 4 Lunar Eclipses on Passover and Feast of Tabernacles in 2014-2015 and 2 Solar Eclipses on 1 Abib “God’s New Year” and 1 Tishrei “Rosh Hashanah” aka Rabbinical New Year in 2015. No prophecy here, just keeping watch.

In the movie, Noah quotes

“Fire consumes all. Water cleanses. It separates the foul from the pure. The wicked from the innocent. And that which sinks from that which rises. He destroys all, but only to start again.”

Not from the bible but from Satanic psychopaths who believe they can destroy Earth and it’s non-enlightened inhabitants to begin again; just read Nature’s Commandments in the Georgia Guide Stones.

Noah features 11ft tall, 6 armed Watchers banished to Earth and led by “Shemyaza”. Shem means “Name”; Azaz means “Rebellion”; recall Rabbi Menachem Mendel Schneerson predicted Sephardi (Sepharvaim burn their children in fire to Molech; they are not Jewish ref 2 Ki 17:30) Rabbi Yitshak Kaduri would witness the return of the Messiah; Kaduri predicted “When Ariel Sharon dies, the Lord will return”. Wrong Messiah guys! Schneerson was called “HaShem” (Master of the Name); Shemyaza is another name for Satan, the “Rebellious Name” and so-called leader of “Fallen Angels”; the name originated in the Apocryphal book 1 Enoch during the Inter-testament period and no these books are not Jewish. “Nephilim”, “Watchers” and “Grigori” as “Fallen Angels” are Satanic creations. The word “Watcher” is used in Daniel, a name meaning “God is my Judge”.

“This matter is by the decree of the watchers, and the demand by the holy ones: to the intent that the living may know that the most High ruleth in the kingdom of men, and giveth it to whomsoever he will, and setteth up over it the basest of men”
– Daniel 4:17

Take a good look at this, God sets up the basest of men in order that the living may know He rules over earth. God’s “Watchers” and “Holy Ones” are not “Fallen Demonic Angels”!

Another Watcher is named “Magog”. Magog is also a son of Japheth, representing the 4 quarters of the Earth in the final gathering “Gog and Magog” 1000 years after the 2nd Coming (Eze 38:1; Rev 20:7); don’t be confused; “Gog and Magog” is the final rebellion, 1000 years after the 2nd Coming. Nephilim are total made up nonsense. Angels do not mate with human women!

After the Flood, Noah discovers his daughter-in-law is pregnant; to save the earth from repopulation, he needs to kill the baby. What bible is this from?

Noah’s nemesis is Tubal-cain; Noah descended from Seth; Tubal-cain from Cain. Masonry (Cainite religion) adores Tubal-cain as the teacher of all artificers of Brass and Iron. The 3rd Beast is Esau’s “Dominion”; Jesus gives Edomites rule over all the earth in Dan 2:39; 7:6 and Gen 27:40 KJV; this is the “Kingdom of Brass”. Edom then gives his “Dominion” to the 4th Beast “Kingdom of Iron” ruled by Satan. “…behold a fourth beast, dreadful and strong exceedingly; and it had great iron teeth: it devoured and brake in pieces, and stamped the residue with the feet of it” Dan 7:7

The UN Meditation room is an “Unfinished Pyramid” 11ft X 18ft X 33ft and has 11 chairs set up behind a 13,000Lb block of iron ore “Lodestone”ain the proportions of the King’s Chamber of the Great Pyramid in Egypt. This is “Satan’s Altar” of the “Iron Kingdom”. Lodestone means “Leading Stone”. Aleister Crowley called the number 77 the ultimate manifestation of spirit in matter; Anton LaVey (Howard Levey) listed 77 names of Satan in the Satanic Bible. Satan incarnate in an “Alternative Messiah” folks! Call him al-Mahdi, Krishna, Buddha, Maitreya, just not Jesus Christ!

Masons and Talmudic Rabbis teach Noah married Naamah, Tubal-cain’s sister; there is no scriptural reference to this. The seed of Cain through Naamah would have been transferred to Canaan from his father Ham. “Ham the father of Canaan, saw the nakedness of his father, and told his two brethren without…And Noah awoke from his wine and knew what his younger son had done to him. And he said, Cursed be Canaan; a servant of servants shall he be unto his brethren” Gen 9:22-25. Notice here “younger son”; Japheth was Noah’s elder son; hence his sons Magog and Tubal had the birthright and are dwelling in the tents of Shem (Gen 9:27) as fake Jews. Canaan was “Cursed” because he was the first post-flood product of Mother-Son “Incest”; for this reason the Covenant with Abraham forbid the marrying of the “Daughters of Canaan”. Incest has nothing to do with Demon/Human intercourse; the latter is a Satanic Lie.

In the movie, God orders Angel Gabriel to cause Civil War between the Nephilim and their Satanic offspring? This nonsense is not in scripture. God destroyed the Giants with the Flood, not Civil War. One place Gabriel does figure in is Dan 8 describing the war between the Mede-Persian Ram (Iran) and Grecian Rough Goat; Uncle Sam wears a Goatee for this reason.

Azazel is also in the movie; Azazel means “Goat that Departs”; Azazel is an infernal name of Satan and a corruption of Lev 16:8-10 “Scapegoat”. Jesus is the “Scapegoat” upon whom the Sins of the world are placed; Satan is the false Scapegoat “Azazel”. The video My Pet Goat II tells the story in 5 minutes.

Study bible notes usually attribute Tubal to Tobolsk, the Siberian Capital of Genghis Kahn and Meshech to Moscow; they are sons of Noah’s eldest son Japheth not locations. They also add “Rus” or “Rosh” to the list of participants in the final battle “Gog and Magog” in Eze 38:1; these are lies. Gog and Magog are the 4 quarters of the earth; Magog is also a son of Japheth. The world’s final gathering around Jerusalem occurs 1000 years after the 2nd Coming (Rev 20:8). Rus has nothing to do with modern day Russia or the British statues of the Giants “Gog and Magog” guarding the City of London. British means B’Rith=Birthright Covenant; that would be Japheth, Ishmael and Esau meant here not Shem, Isaac, Jacob and Jesus Christ.

“And the angels which kept not their first estate…Even as Sodom and Gomorrah…are set forth for an example, suffering the vengeance of eternal fire…Woe unto them! for they have gone in the way of Cain, and ran greedily after the error of Balaam for reward, and perished in the gainsaying of Core…And Enoch, also, the seventh from Adam, prophesied of these, saying, Behold, the Lord cometh with ten thousands of his saints, To execute judgment upon all…” Jude