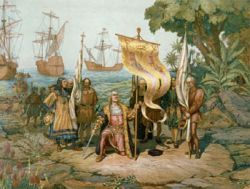 [/frame_right]Columbus Day or Thanksgiving Day in Canada, a celebration of Harvest and Blessings in the New World. Salvadore Fernando Zarco “Hermetically Sealed” secret correspondences between King Ferdinand of Aragon and Isabella of Castile with a Kabbalist Signet containing his “nom de plume” Christobal Colon and his supposed birth name Fernando Zarco. The Triangle shaped Signet was similar to Gravestones found in the Cathar region of Langue d’ Oc in Southern France/Northern Spain. Explorer? No, Kabbalist and Sephardic? Yes. Are Sephardics Jewish? 2 Kings 17:30 describes Sephardics as Babylonian, Medean, Hamathites, and Canaanite imposters of Israelites brought in by the Assyrians due to treason by the Tribe of Ephraim. Are Kabbalists Jewish? Kabbala is called the “Work Upon the Sacred Tree”; Ka’aba has a common Root meaning “Sacred Enclosure”; Druids were “Knowers of Trees”, their Sacred Enclosures were called “Groves”, so Kaballah is more of a Druid Church of Allah aka “Sin” than being a Jewish religion. Now, was Columbus a Mormon?

Zarco and his “Book of Priveliges” proclaiming him Admiral of the Seas, Governor of the New World in perpetuity with associated Titles, Revenues, Powers, and Priveliges he granted to himself and signed by the King and Queen boarded the ships on 9 Av 1492, the date commemorating the destruction of the 1st and 2nd Temples and Moses leading the Israelites across the Red Sea in 1492 BC. Hyksos “Foreign Shepherd Kings” were Amalekites whom God swore He would be at war with from generation to generation. They were expelled from Egpyt just prior, for instigating War with God’s people. Seeing Red yet?

Nobody seems to know where Zarco/Colon was born, what language he spoke, where he was buried or his religious affiliation; only that he had been in the service of Rene d’ Anjou who has been claimed to be a Grand Master of the Prieure of Sion (There are no Grail Guardians and there is not Sacred Bloodline; it’s all a Lie) of the believed himself descended from the Race of Nephilim and Cain. Nephilim is not in scripture, Giant is; Amalekites were often Giants, as Joshua and King David found out. Descendants of Cain, can only have 1 source, Ham “Hamathites”, whose incest with his mother produced Canaan. There is your Titanic Bloodline; too bad a mother’s blood is not passed on to her son eh? That goes for Mary too folks! Jesus answers prayers, not Mary! Rene d’ Anjou did however invent the Cross of Lorraine aka Cross of Free French Forces or “Double Cross”. “A man’s enemies shall be they of his own household” and Rene was definitely one of those, as was his daughter, largely responsible for the War of the Roses.

A letter from Itanial Revolutionary and 330 Mason Guiseppe Garibaldi to Abraham Lincoln says it all “To another of the free children of Columbus”; Honest Abe is seems was the leader of the Rosicrucians in America; same Red Cross from an order allegedly dating back to Pharaoh Tuthmoses III. Why him? His stepmother Hatshepsut was likely Moses’ adoptive mother. Toth is today seen in the Scales of Justice and the Emerald Tablet of Toth-Hermes which begins “That which is above shall be that which is below” Heaven brought to or rather built on Earth if you will, by Secret Societies. The letter goes on “I don not admit any intermediary between God and Man” Well, there you have it; rejection of Jesus Christ as Intermediary between God and Man; rejection of Jesus as Melchisedek “King of Jerusalem” and “Priest of the LORD” and rejection of a personal relationship with Jesus Christ through the Holy Ghost is the only “Unforgivable Sin”. How does that St Christopher Medal look now?

Zarco was an initiate of the Portuguese “Order of Christ”; Jesus Christ? Heaven’s no, these were survivors of the Knights Templar purge by King Phillip of France and Pope Clement V in 1312 who founded the New Order of Christ in Portugal using King Joao II, the Sephardic/Latin counterpart to King Robert the Bruce in Scotland if you will. Zarco was more Cathar Military than Catholic.

The Order’s Ensign is the Red Cross, but not just an ordinary one mind you. The Foundation Stone of the World is regarded as the Rock under the Al Aqsa Mosque where Abraham offered Isaac (Ishmael in the Quran), Jesus was Crucified after ejecting the Money Changers from the Temple and where Jesus will establish “Zion” at the 2nd Coming. These “Bankers” were ejected in 1290 AD from Briton for “Usury”; 700 years later the Gulf Wars began; what they have planned for 2012 is becoming pretty obvious; Financial Collapse and War in Iran and Syria and destruction of the Dome of the Rock.

The Dome of the Rock has 8 sides because Jesus Christ represents the 8th Covenant between God and Man. Connecting the 4 central pillars to the outer pillars yields the Ensign used by the Order of Christ; basically 4 Pillars meeting at the Rock where the 3rd Temple will be constructed, the Cohen Gadol will be installed and the ashes of the 3rd Red Heifer used to consectate the Priest and Cornerstone of the Millennial Temple. Jesus Christ is of course the Chief Priest-King and Judge of Jerusalem “Melchisedek”; He is also the “Cornerstone” not cut by hands that will smash all this nonsense. Folks, God builds the Temple, not Man. Read Acts 7:48 Mormons sure do love building Temples though!

Christopher Columbus, is itself a pseudomym meaning “Christ=Messiah; Taufr=Red” in Norse/Norman language. Columbia is the Roman goddess of Freedom and Liberty from God; She stands facing East with her back to the Nation in NY Harbor and atop the US Capitol. Columbus, an initiate of the “Order of Christ” set off to found “New Jerusalem” aka “Zion”. Mormons were first called the “Church of Christ”; they claim descent from Ephraim and Masasseh “Stick of Joseph” (ref Eze 37:16; Rev 13:1) and Dan meaning “Judge”. Their goal is to set up “Zion” in America. They hold the Melchisedek Priesthood of Jesus Christ, revere the “Sure Sign of the Nail” that held Jesus to the Tree and chant “Pey Heylel” (Marvelous Lucifer).

Longitudinal navigation requires accurate time keeping, accurate knowledge of the size of the earth and correct Star Charts for each Latitude; Columbus didn’t “Discover” anything.

So, on Columbus Day, are you going teach your children Columbus brought Christianity across the Flat Earth and thought he was in India? Or will you teach them a Sephardic, Kabbalist murderer and gold thief brought Smallpox and “Blood Hounds” to New Jerusalem, hanging natives 13 to a row on “Gibbets” and selling Slaves, so future Conquistadores could sail up the Mississippi River to “Adam-ondi-Ahman”, the land where Mormons claim Cain killed Abel and where Prince Melchisedek will soon hand the keys of Government over to a person called the “Christ”? Hopi Indians call this “Christ” “Red Kachina” for a reason! Jesus said the “Truth will set us Free”. In 2012, Columbus Day also happens to line up with the 8th Day of Feast of Tabernacles, the 22nd day of the 7th Month. 22/7=Pi The Circle of Heaven was brought to Earth anc Circumcised in fulfullment of the Law. His Law now is “Love God” and “Love our Neighbor” not conduct Crusades around the world. One prayer in your Prayer Closet will help you obtain a real Spiritual Circumcision; why not cast off a few Lies and become truly Free?