Reactor coolant is intentionally shut off prior to the Tsunami by Siemmens Corp controllers.

Fuel Rods melt; shutting down fission reactions now becomes impossible due to reactor core deformations. Photographs show, fires had broken out well before the arrival of the Tsunami wave.

Hydrogen gas is vented from the reactor core. The Nitrogen inerting system is intentionally turned off. Hydrogen explosions blow the roof off the spent fuel containment buildings.

Deepwater Horizon caught fire on 4/20/2009 “Weed Day” and sank on “Earth Day”. When an Oil Drilling Rig catches fire from a well blowout, the well head shear ram is closed and the rig is severed from its mooring; this did not happen. Shear Rams, 7 separate Door Rams, and 2 annular valves all mysteriously failed during this orchestrated disaster.

Oil, Methane and Corexit destroyed and continues to destroy the Gulf of Mexico and blocked the Thermohaline Ocean Conveyor in the Atlantic. Having several million galllons of the UN banned Glyphosphate “Round Up” weed killer called Corexit on hand does not happen by chance. Gulf of Mexico means “Place where the World’s Ocean Currents Converge”. This location was not chosen by chance; like Fukushima, it was the perfect location for this type of destruction.

Macondo Prospect in Mississippi Canyon sits in 5000ft of water; oil sits 18,000 below that at a pressure of 7000psi. The drill pipe filled with rapidly expanding supersonic methane reportedly at pressures of 100K psi; when drill mud was replaced with seawater and Halliburton well head cementing failed, methane laced sand quickly eroded the drill pipe walls. When the well cap was finally installed; the methand and oil sought the path of least resistance and still does; leaking out of the pipe and casing into the surrounding geology. The amount of oil and frozen methane hydrates is estimated to be on the order of the volume of Mt Everest; in other words, the event may never end.

Phosphate fertilizers, used in commercial farming travel down the Mississippi river to the Gulf of Mexico where they cause Algae blooms. Corexit is Glyphosphate weed killer; as the algae dies, it robs the ocean of oxygen; mixed with benzene, pneumonias and blood disorders result in fish and humans. 2 years on, Fish deformities are becoming very apparent. This is how Earth Destroyers operate and why Jesus returns to “Destroy them which destory the Earth” Rev 11:18. 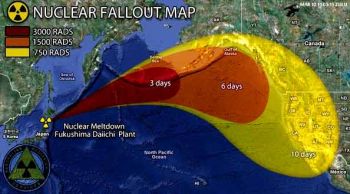 Why at the Gulf of Mexico and Why at Fukushima?

The location of Fukushima at the origin of the Pacific Jet Stream and the use of Seawater in the reactors caused the world’s greatest disaster by orders of magnitude. Far worse than Chernobyl which released radiation into the atmosphere during the explosion; Fukushima is releasing radiation constantly into the Ocean where its course east takes it to the North and South American continents, and into the Atmosphere where its course follows the Jet Stream east full circle.

Swarms of earthquakes are converging on Fukushima; if the Reactor #4 Spent Fuel Pool collapses, an ELE (Extinction Level Event) will likely result. At that point, atmospheric radiation will shower North America, Europe and northern Asia; local radiation will likely soon cause an Exodus from Japan along the ancient “Silk Road” from the “Rooftop of the World” aka Chomolongo “Earth Mother” to Islamabad, Kabul, Tehran, Baghdad and Har Megiddo where God slew 450 of Baal’s prophets. Russia and Japan Governments are currently (April 2012) planning for forced relocation of 40 million Japanese to the Kuril Islands in the event Reactor #4 SFP collapses or becomes dry.

The US Navy has Aircraft Carrier Groups, Abraham Lincoln, Enterprise and John Stennis are at the Straits of Hormuz; Carl Vinson near Socotra Is in the Arabian Sea; HW Bush off the Syrian coast. George Washington is in the China Sea for US-Philippine exercises during China-Russia naval exercises and the Amphibious Group (Bataan) at the Gulf of Aden (Yemen-Ethiopia). Why? America is named after Amurru the Edomite Shepherd god. The US will Shepherd the largest Exodus in the world as a Scapegoat for Rev 18 “Babylon”. Note: This Exodus will be associated with the revealing of the Alternative Christ, not Jesus Christ.

Radiation is entering the Pacific Jet Stream and Pacific Ocean Conveyor constantly from the one place on earth capable of doing so. The Silk Road connects the 38th Parallel (Fukushima, Japan and Incheon “DMZ” Korea) to the Valley of Megiddo through SW China, Pakistan, Afghanistan, Iran, Iraq, Jordan. This Exodus will precede the arrival of Antichrist, in Persia called “al-Mahdi”; in India “Krishna”, in China “Buddha”. America “Amurru” will Shepherd the sheep to slaughter. My guess is that the USS Enterprise will sink near the Straits of Hormuz, creating a similar event to that in Fukushima with it’s 8 reactors; simultaneously, Oil shipping will cease.

Language of Birds “Inauguration” (Bird is Yes and Oil in French)

The Golden Age will be Inaugurated (Augurs foretell the future by the flight of entrails of birds. Nikolka Tesla patented and demostrated free Electro (Sun) Magnetic (Earth) powerd energy transmission; he was murdered by his lab assistant Prescott Bush and Hitler’s bodyguard Otto Skorzeny in New York; his inventions were sent to another Theosophical Society “Brotherhood of Death” initiate Joseph Stalin. These weapons alter Jet Streams, crate Earthquakes and Volcanic Eruptions on command. “Yes We Can”, a familiar Obama campaign slogan means the Language of Oil is at its conclusion. In America alone, the Bakken Oil Field in MT-SD contains an estimated 500Billion Bbls of oil; the ANWR a similar amount and the Gulf of Mexico a similar amount. Deep Water Horizon, another intentionally created disaster put a stop to oil production.

Diesel is the world’s Achille’s Heel. Worldwide shipping by Land via Train or Truck; by Sea via Ship or by Air via Commercial airlift (Jet Fuel and Kerosene are roughly equivalent with Diesel Fuel) depend on Diesel Fuel which is why its price is outpacing that of gasoline (intentionally). The price of Diesel translates directly to the price of Food. “Control Oil you control Nations. Control Food you control People”-Henry Kissinger

The Bible tells us Jesus returns to:

“Destory them which destroy the Earth” Rev 11:18

This is how it’s done…